For a better experience please update your browser.

Your browser must have cookies enabled otherwise you will not be able to login or register. Please enable cookies in your browser and then refresh the page to continue.

Your data is being transmitted securely via a strong 256-bit encrypted SSL connection.

Total booking fees comprise charges for IT services, credit card charges and/or other administrative fees allocated by the event organiser

Alan Hinkes OBE has kindly agreed to provide CSSC members with a signed copy of his book 8000 Metres: Climbing the worlds highest mountains.

Price includes a signed copy of his book and postage

Alan Hinkes is the first Briton to climb all the world's 8000m mountains. These giant peaks are all in the Himalaya and Karakoram ranges of Nepal, Tibet and Pakistan.

Here he recounts his expeditions to these mountains, from the first British ascent of Manaslu to the final climb on storm-bound Kangchenjunga.

Alan explored the mountains alongside a tiny number of elite climbers similarly drawn to the extreme hardships and challenges of high-altitude mountaineering.

Most of the climbs were made Alpine-style, as part of small, lightweight expeditions. A number of summits, including K2 and Kangchenjunga, were climbed solo.

This graphic account of his immense achievement is richly illustrated with his unique and dramatic photographs, taken under extreme conditions. As Joe Cornish writes, 'His photographs are both a moving documentary record, and artistic expression, of what it means to encounter the highest places in the world.'

Most importantly for Alan, he returned from his 8000m challenge in one piece, able to enjoy the company of his family and to continue climbing and walking in his favourite local hills of Yorkshire and the north of England.

Alan Hinkes is an International Mountain Guide, writer, photographer, environmentalist and an active campaigner for charities including WaterAid, Diabetes UK, the Cystic Fibrosis Trust, the Duke of Edinburgh's Award, the Outward Bound Trust and Mountain Rescue. He works closely with the British Mountaineering Council.

Alan first took up rock climbing at Northallerton Grammar School in North Yorkshire. His mountaineering career pro-gressed to the Alps, tackling many classic ascents, including the notorious North Face of the Eiger, before graduating to the Himalaya.

Awarded the OBE in 2006, he is also an Honorary Citizen of his home town, Northallerton, Yorkshireman of the Year and holds honorary doctorates and fellowships from the Universities of York, Teesside and Sunderland.

Still based in North Yorkshire, Alan enjoys tramping the fells and moors of the Lake District and Yorkshire, where you will regularly find him clinging to a rockface or climbing a frozen waterfall. 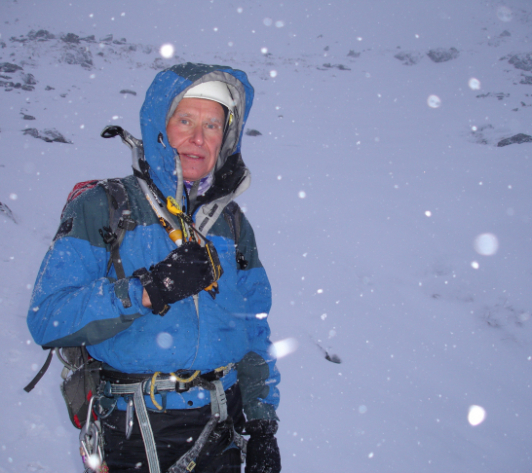 Helping individuals and families get more out of life since 1921